The chiton is the basic garment for both men and women in the Ancient Greek Civilization. It is created by wrapping a rectangular shaped piece of fabric around the body and securing it in place with pins (fibulae) and belting (girdling). Fabric for these garments was woven to correspond with the intended wearer’s height (shoulder to ankle) and armspan (either elbow to elbow or wrist to wrist depending on chiton style).

In this statue, Artemis is depicted in a short chiton, fastening a diplax at her shoulder with a fibula.

The diplax was the female version of a chlamys (a square of fabric pinned over the right or left shoulder, usually worn by traveling and/or young men).

The marble relief of Athena below depicts the goddess in the female version of the doric chiton. The forerunner to this garment is the doric peplos. The main difference in the two garments is what device is used as a fastener at the shoulders. The peplos version used a decorative straight pin as fastners, which proved to be useful weapons as well as closures. The doric chiton uses fibula instead. 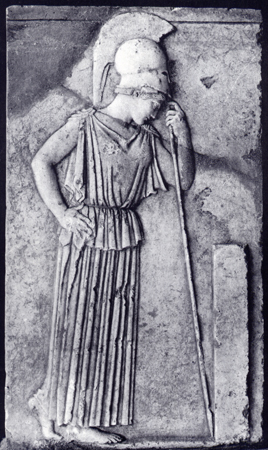 Athena wearing a Doric Chiton with an overfold.

The key feature of the doric variety of chiton (for women) is the overfold which, here, forms a short of peplum below the waist due to girdling (belting) of the garment. The warrior helmet is a common symbolic device used to portray the goddess.

The male figure on the drinking vessel below portrays Odysseus. He is wearing either the male version of the doric chiton or and exomis. 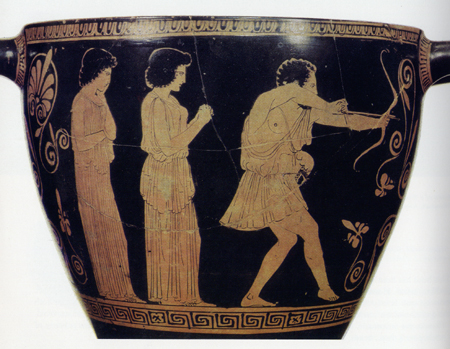 Since Odysseus was neither a slave or member of the working class, it would be best to label this garment a Doric Chiton. The two women behind him both wear the female version of the doric chiton. Notice the variations between the two garments- including length of overfold and placement of the girdle. 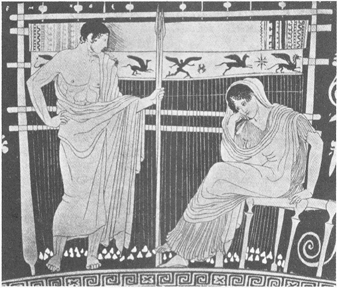 Both individuals in the image to the left wear the himation. This garment is a quite large rectangular shawls. Historians believe that this is an outergarment, and would not be worn alone as the male figure (Telemachus) is depicted. Historians agree that this is most likely an artistic convention usually used to signify one of the deities. Notice how the female figure (Penelope) wears this garment. Historians believe that the covering of the hair was common practice among women. They may have also used the himation to conceal the face in public. 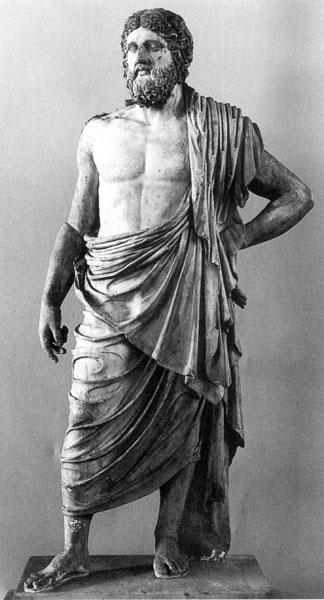 Statue of a philosopher wearing a himation, 3d cent. BC (Delphi).

These nineteenth century models below are wearing variations of the Ionic Chiton. The Ionic Chiton is much wider than the Doric Chiton, and fastened down the length of the arm with multiple fibulae. Girdling was optional. 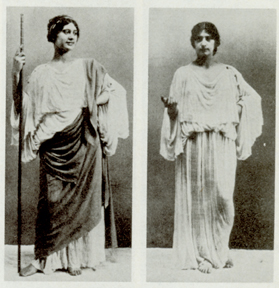 The model on the left is wearing a diplax over her chiton. 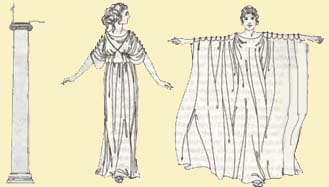 A male chiton. Notice the variation on the girdling-around the waist and underneath the arms.

SILHOUETTE SHAPE: Columnar (tall & narrow) with a natural relationship between body and head.

KEY IDENTIFIERS: utilitarian hair styles and headdress that keep the head in the same scale as the body (unlike Egyptians), shape of the body is often revealed through the drape of the garment, use of the chiton.