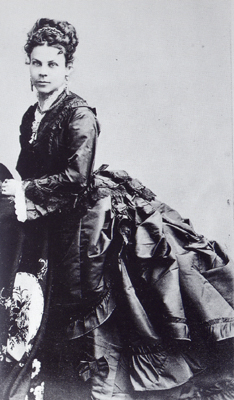 1870s photograph of a woman in a soft bustle.

Once we enter the 1870s, skirt fullness is concentrated in the back of the dress. The cage crinoline of the 1860s becomes the bustle or false rump of the 1870s & 80s. Bustles could be constructed using the same techniques as the cage or could simply be a padded pillow-like structure tied around the waist. Whatever the apparatus, it is the posterior that is accentuated. Decorative details help to emphasize this new silhouette creating prominent exaggeration through creative fabric draping and complex trimming techniques.

The trend of pulling the skirts backwards in a draped fashion and securing them over the bustle is given the name a la polonaise. (This is the name given to 18th Century skirts worn in a similar fashion.) 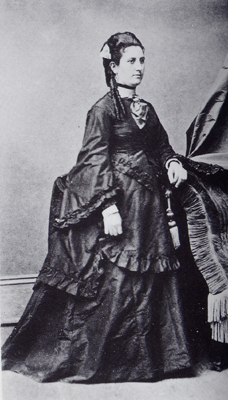 1870s photograph of a woman in a soft bustle.

While the bustle-effect is pronounced during the 1870s, the silhouete manages to remain soft, draped and feminine. Much of the bustle fullness is created by the strategic piling of fabric. The bustles of the 1880s lose some of these qualitites.

While sleeve styles are gradually becoming narrower and more fitted, pagoda sleeves are still quite common during the early 1870s.

The sloping shoulders fashionable in the prior period disappear as the armscye returns to its placement upon the shoulder joint. The jacket bodice remains the favored style. The peplum-style extension below the waist is called a basque. Some of these lengthen quite a bit, resembling an overskirt. 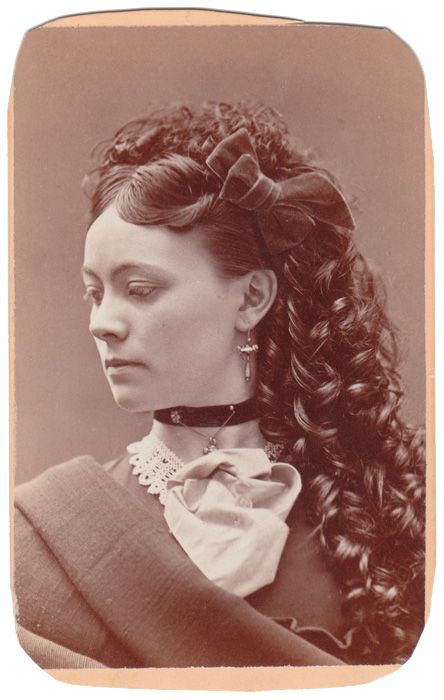 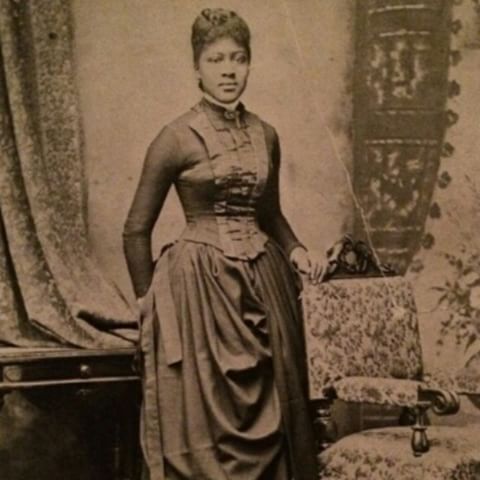 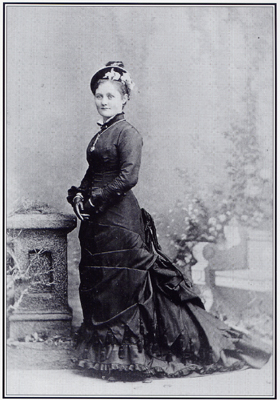 Photograph of a lady from the 2nd Bustle period (Cuirass/Sheath bustle).

During the late 1870s and early 1880s the silhouette changes dramatically. The cuirass silhouette pushes the fullness of the bustle downward. Often the same skirts typically worn with the bustle are redraped and rearranged in order to acheive this new silhouette. This results in some fairly complicated “tied back” effects. Trained skirts are popular both for daytime and evening wear. A dust ruffle-a ruffle attached to the underside of the skirt hem–is a common addition to protect trailing fabric from getting soiled.

The preferred sleeve of this silhouette is set smoothly into the armscye and is fitted to the arm. Dresses fit snugly from shoulder to about mid-thigh or slightly lower. Decorative details slowly begin to diminish as well. 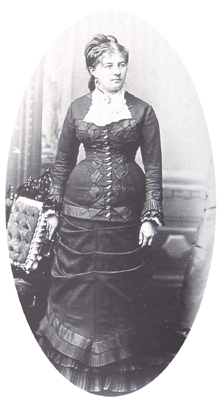 During the Bustle period tight-lacing is a very prominent practice. A tiny waist is still a much sought after beauty trait. Unlike the Crinoline Period the silhouette–especially during the cuirass silhouette period–does little to enhance the illusion of a tiny waist.

Bodices fit smoothly over the corset and other undergarments. Notice how dramatically her corset changes her natural shape. If you look closely at the bust line, the top ridge of the corset is visible. 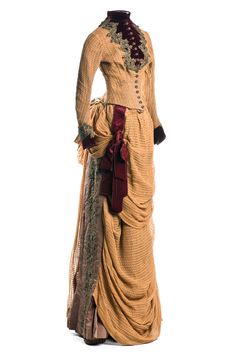 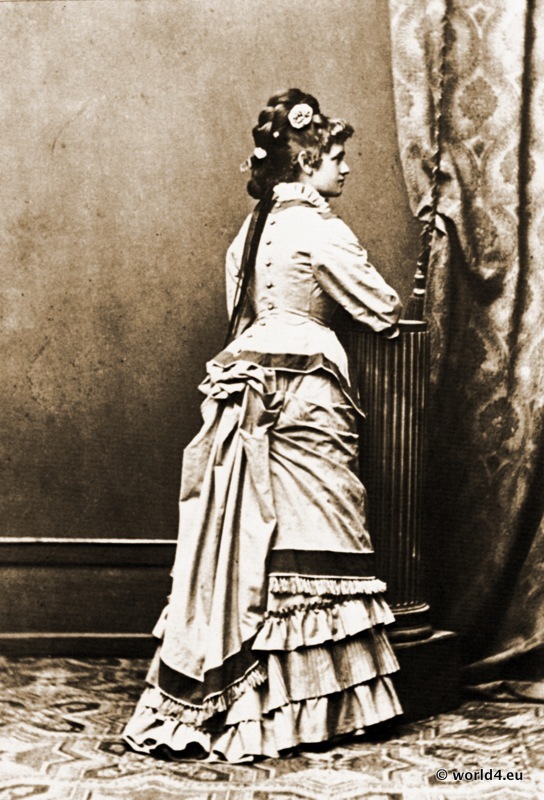 Photograph from the 2nd Bustle Era. 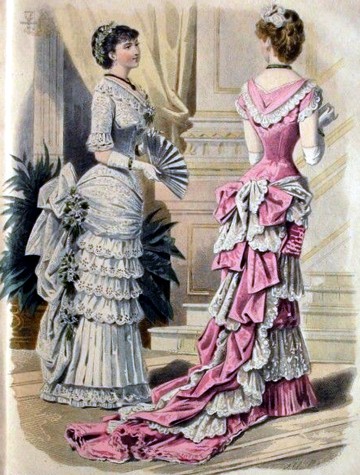 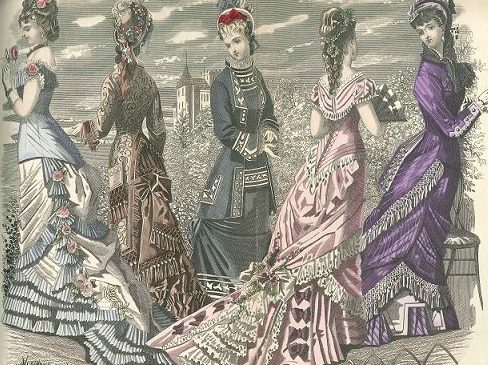 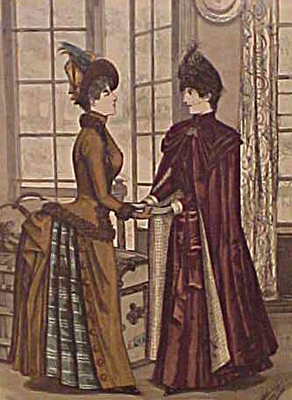 During the mid to late 1880s the bustle returns with a vengence and they are bigger and stiffer than ever. Bodices retain much of the qualities of the cuirass silhouette, and decorative details continue to become less fussy. The structure of the new bustle–often referred to as a shelf bustle–is all apparatus and little fabric, much the opposite effect from the first bustle period. The resulting line is much stiffer and more architectural than that of before–as if their clothing is almost upholstered to their bodies. The 90 degree angle created between the back and the top of the bustle seen here is common during these years. Trains are rare.

Bodices were commonly cut with extra fullness in the peplum center back. This shape is often referred to as a fishtail. The cut allows the peplum to ride flat and smoothly upon the bustle.

The woman on the left pictured in the fashion plate above is a perfect example of the Shelf Bustle years, while the woman on the right is foreshadowing the silhouettes of the 1890s (she is wearing an ulster-a long coat made often made with a removable cape collar or hood). 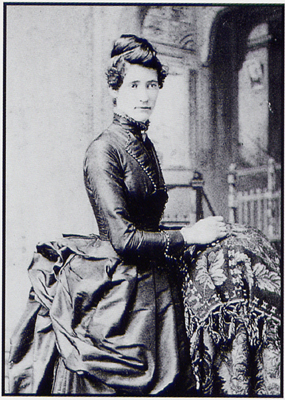 1880s photograph of a woman. She is wearing a bustle style from the 3rd bustle period (shelf bustle)

This photograph to the right  demonstrates that the cut illustrated in the above fashion plate was indeed achievable by fashionable women of the period.

There is also a vogue for dark “serious” fabrics that is prominent through the turn of the century. The practice of dark fabrics is attributed to both mourning practices and in honor of Queen Victoria–who mourned the death of Prince Albert for much of the later years of her reign. 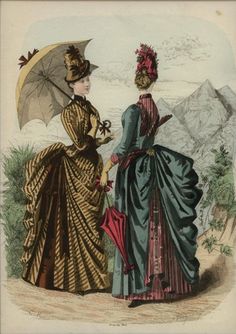 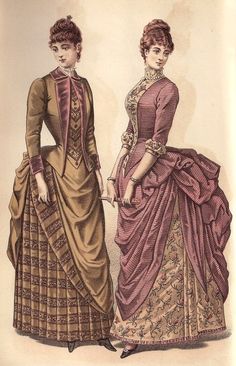 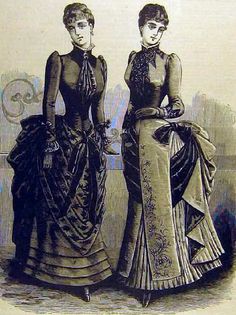 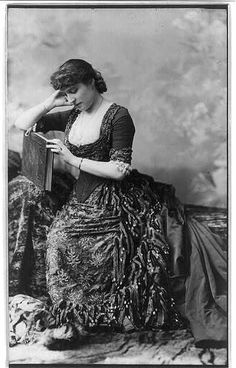 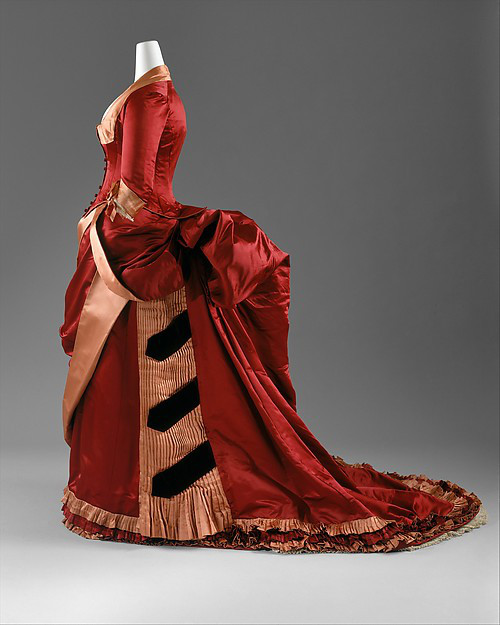 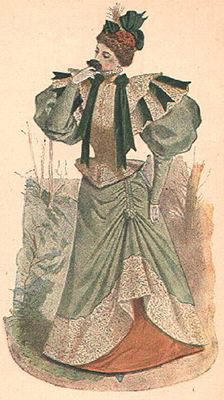 By the middle of the 1880s the bustle once again dissolved. The exaggerated fullness moves from the rump back to the torso. Some women favored newly inflated leg-of-mutton/gigot sleeves so large that both waists and heads appear abnormally small by comparison.

Through much of the 1890s some creative draping of the skirt remains. As the turn of the century approaches skirt construction will simplify to a trumpet shape (fitted through the hips and flaring out below the knees).

The standing band collar is an almost universal feature of bodices during this decade.

Her bodice is still cut to resemble a jacket. There is an insert–called a plastron front (here with small buttons running from neck to waist)–filling in the bodice center front.

The gentle swagging at the center front of her skirt is referred to as an apron front. 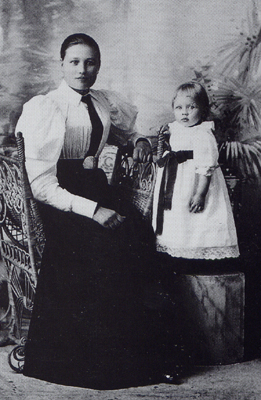 1890s photograph of a mother and her child

During this period many middle class women are beginning to attend universities and find work in the professional world. Pictured here is a fairly typical ensemble worn by female university students, teachers, and secretaries. Women’s clothing assumes some decidedly masculine features in order to “blend” into the male world. Blouse, skirt, and jacket combinations are often paired with a dark tie–the resulting silhouette is reflective of male attire while remaining very feminine.

The cotton blouse–called a shirtwaist–retains the fashionable sleeve shape, but adopts the turn down collar present in male shirts. Look closely at the bust line to see the rigid line of her corset. Even her hairstyle (most likely a simple chignon) is fairly utilitarian and somewhat masculine. Her skirt is dark and plainly cut. It is most likely constructed of 4-6 gores that fit smoothly over the hips and allow for a wide hem accommodating a full stride when walking. 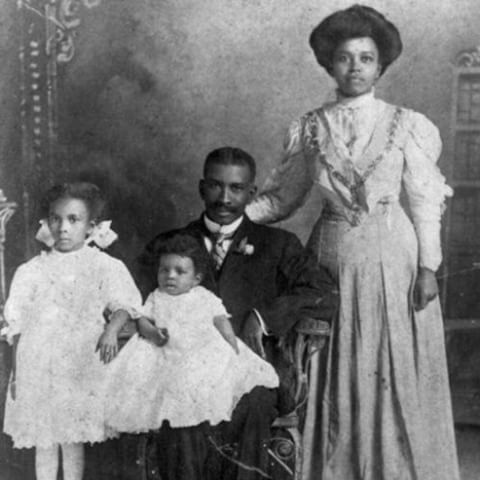 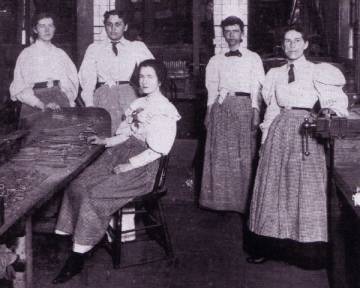 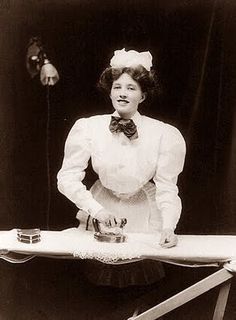 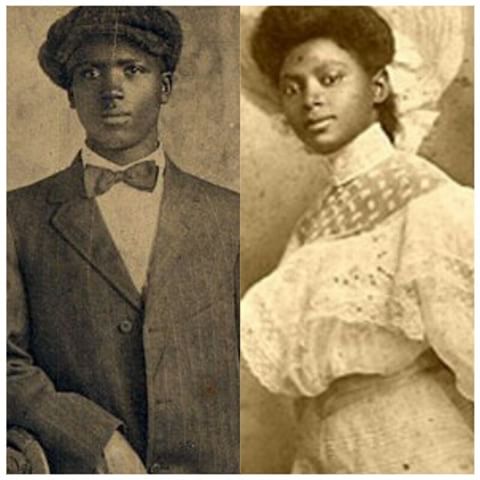 A man wearing sack suit and bowler hat in 1880. Photo taken by A. Johnson in Cumberland, Wisconsin

The sack coat and the ditto suit continue to grow in favor. A common version of this coat is pictured here. A sack coat is cut straight from shoulder to hem without a seam at the waist. The center front corners at bottom edge may be cut straight or slightly curved (as with this example).

A ditto suit is comprised of three matching pieces–specifically jacket, waistcoat, and trousers.

By the 1880s, it is common for his shirt to have a detachable collar and/or cuffs. Starched collars and cuffs could be ordered via mail order catalog companies (such as Sears Roebuck & Co.) or purchased in ready-to-wear stores.

He is also probably wearing an undervest (undershirt) and drawers or a unionsuit (an “all-in-one” garment serving the same purpose of the above two garments) now made of cotton knit. 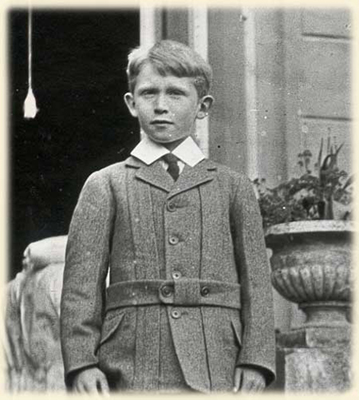 The norfolk jacket (left) was generally made of tweed fabric and was often worn with constrasting trousers or knickerbockers for sporting activities. While it is worn by a youth here, it is an adult fashion as well.

Unique traits of the norfolk include:

–box pleats running veritically from shoulder to hem in the front and the back of the body of the jacket. These allowed for unrestricted movement on of the arms and torso while participating in sporting activities.

–a self belt (a belt made of matching fabric often permanently attached to the garment). 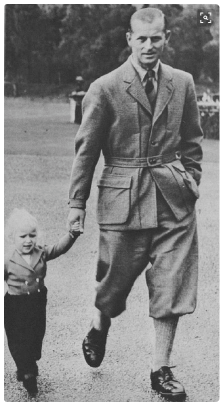 —patch pockets (pockets applied to surface of the garment rather than being set into it. The whole pocket is visible as a result). 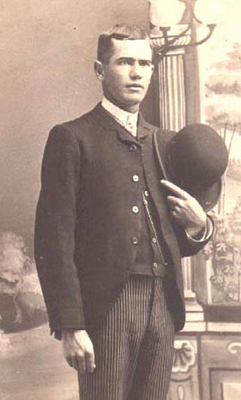 Cut away jacket with striped trousers. Also referred to as a Morning Suit

The cutaway jacket sees a return to fashion as formal morning attire late in the century. The favored name during this period was a morning coat. These coats were cut with a curve that began high on the chest and terminated in center back. Most of the buttons and buttonholes are decorative, only the top one would be able to be functional. The ensemble is quite specific. Morning coats were usually dark in color–charcoal or black–and were usually worn with with black and grey striped trousers. 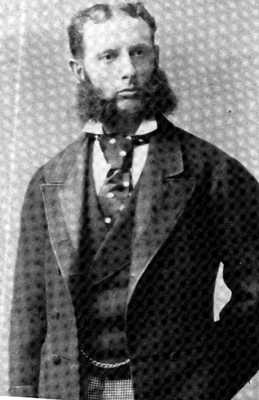 Gentleman wearing a four in hand tie and impressive sideburns.

Cravats are now replaced by neckties (long, narrower versions of the previous neckwear). They are usually worn tied with a version of the slipknot.

Shown here is a large four-in-hand knot–which remains one of the most popular methods of tying a tie today.

Bowties are also popular at the end of the century. 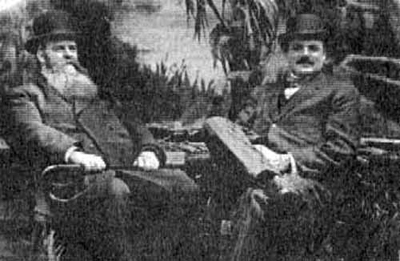 Now considered “professional wear” frock coats are fashionable until the 1890s. They are available in both single and double breasted styles. During the 1880s the sack coat becomes the dominant style.

While a variety of hat styles are available, the bowler dominates the 1890s. In the sketch below one can see top hats, bowlers, a boater (center), a homburg(two hats right of center), and a fedora(fourth from the left). All of these hat styles can be seen during the 1890s. 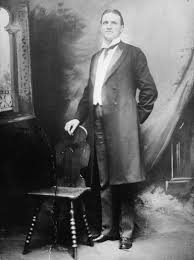 Albumen Print of Photographer with his Studio Camera and Petzval ca. 1890

BASIC GARMENTS: Men: 3-piece suit (sack or frock coat, waistcoat, trousers) worn with a shirt a necktie tied like a bowtie or four-in-hand tie.   Women: extremely wide skirts on gowns. Layers remain the same as Crinoline era. The biggest difference is the replacement of the cage crinoline with the bustle.

Bustle Women’s skirts grow to incredible widths front to back, skirts feature elaborate draping and details and may be trained, Waist remains tiny and is at natural placement, jacket-style bodices feature pagoda sleeves and other sleeve types become rather narrow, women no longer wear bonnets.

1890s women replace the bustle with a trumpet shaped skirt (fitted through the hips and flaring below the knee) and a return of large balloon like sleeves. The hourglass is rather top heavy (huge sleeves and wide collars).