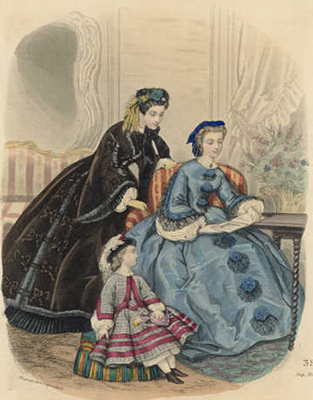 The female silhouette of the Early Crinoline period is marked by skirts of increasing size. By the end of the 1850s they are “dome” shaped. Initially, these skirts were supported by mulitiple layers of petticoats (up to six in number). The bottom most petticoat was kneelength and constructed of crinoline (a stiff fabric with horsehair in the warp and wool in the weft). Skirts reach their largest scale after the invention of the cage crinoline in 1856. This “artificial” crinoline was comprised of a number of steel hoops either suspended from leather straps or set into casings in a cotton petticoat.

Other characteristics of the Crinoline silhouette illustrated here include:

-white lingerie sleeves (detachable white cotton 1/2 sleeves that extend to the wrist below the pagoda sleeve, seen on all three figures here.)

-bodices with sloping shoulders. The armscye placement remains in a position dropped off of the shoulder, making it very difficult to lift the arms past shoudlner height. 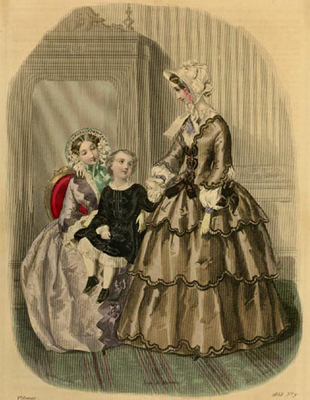 Jacket bodices are a popular trend of the Crinoline period. These are bodices were constructed to mimic the idea of a man’s suit jacket with all of the details and fussiness that marked feminine clothing.

Other trends of the Crinoline period include:

-an emphasis on a tiny waist corresponding with the body’s natural waist.

-small white collars made of cotton or linen. These were often detachable for easy washing.

-dresses constructed from crisp fabrics (ie. taffetas and heavy silks). The body or “hand” of these fabrics helped to enhance the silhouette resulting in a fuller skirt.

-bonnets remain popular, though they decrease in size. More and more hair is revealed. As the bonnet shrinks women tend to decorate their hair with flowers, ribbons, and small hats. 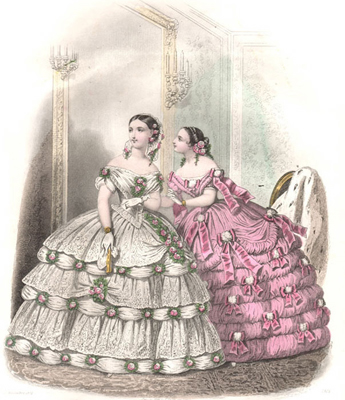 These formal dresses (the white one is a wedding dress) are examples of just how big the cage crinoline could be. Common decorative features are demonstrated here. Many Crinoline dresses–formal and casual–featured multiple layers of a ruffles, as well as ribbons, rosettes, and bows. By the end of the 1850s, skirts had grown to a size that they were quite cumbersome even with the lighter weight cage crinoline supporting their size. 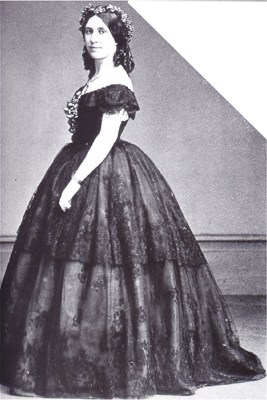 1860s photograph of a lady in an evening dress. 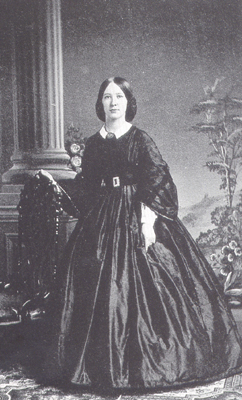 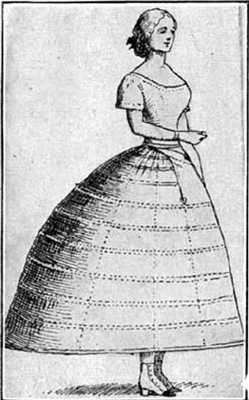 After 1860, the shape of the fashionable skirt silhouette begins to slowly change. The front flattens, pushing the fullness towards the sides and back. The overall line becomes much more angular, or pyramidal. This shape foreshadows the Bustle silhouette of the 1870s.

The size of the hoop skirt begins to shrink throughout the remainder of the decade, until the only remaining fullness is confined to the hindside. 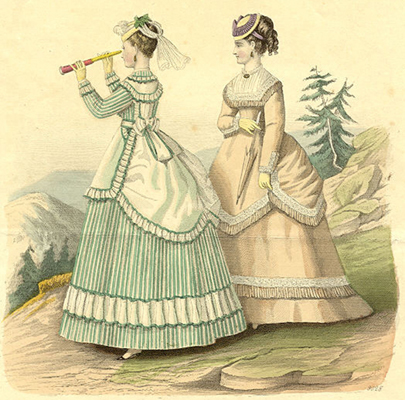 Due to the cage crinoline’s shift in fullness women appear to be leaning forward like the prow of a ship by the end of the 1860s.

Aside from the evolving skirt silhouette, most of the fashionable trends of the 1850s remain true for the 1860s.

Late in the period, the trend in hairstyles is to wear the bulk of the hair lower on the head. Pieces often hang downward in back either in a snood (a decorative hairnet), in ringlets, in loops, or in coiled braids.

Hats continue to shrink in scale, placing emphasis on the coiffure rather than covering it up. However, most women continue to wear something in their hair even if the hat is set aside. She may simply opt for strategically placed flowers or ribbons. 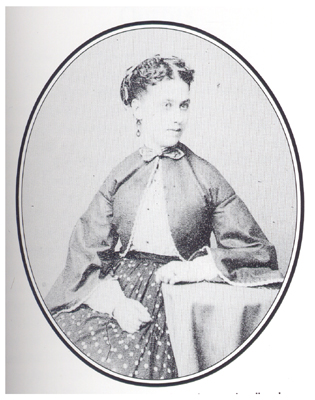 Portrait of a lady wearing a zouave jacket with a habit shirt (blouse).

Zouave jackets and garibaldi blouses are very popular during the 1860s. Inspired by the uniforms of Guisepi Garibaldi’s Zouave soldiers, this is one of the first contemporary looks featuring a skirt & blouse. The garibaldi will adopt the name shirtwaist in future periods. It is defined as a cotton long sleeve blouse. Initially these were red mirroring the red flannel shirts worn by the soldiers, but soon after their introduction other colors–such as white and black–become popular. The zouave jacket is very similar to what we would call a bolero today. 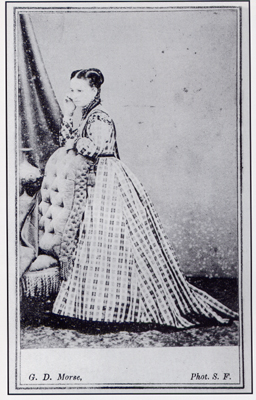 Photo of a lady wearing a plaid 1860s day dress. 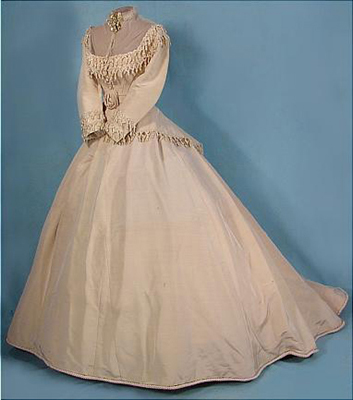 1868 heavy Ivory Silk Faille with Chenille Fringe Wedding Gown. Alonzo H. Wood didn’t know if he would survive the Civil War but he kept looking at the beautiful daguerreotype of his lady love in Boston. He knew if he made it home alive, he would ask her to marry him. He only hoped that she had waited for him. She did. And this is the gown she wore to their wedding in 1868. 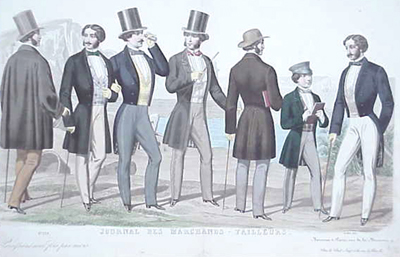 The male silhouette changes only slightly during the 1850s. Things become a bit more relaxed, but basically the silhouette is the same. The frock coat becomes the prefered suit coat of day wear. Tail coats are the preferred coat for formal and/or evening attire. During the 1860s, the tail coat is only really worn for the most formal of evening occasions. They no longer close center front, prominently displaying the waistcoat.

Other fads for men during the Crinoline Era include:

-Plain or tweed fabrics. Although stripes and plaids are often used for waistcoats and trousers.

–Shirt Studs are used in the place of buttons Center Front.

The man at the far left in the engraving above may be wearing a reefer(AKA. peacoat).  He back is to us, so it is difficult to tell. Reefers were double breasted greatcoats that were loose and boxy throughout the torso. They generally had side vents and small collars and are visually quite similar to the sack coat. 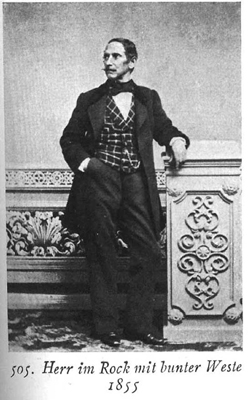 1855 photograph of a gentleman in a frock coat

This photograph (left)–taken in 1855–demonstrates what the clothes in the above fashion engraving really looked like. He is wearing a pretty standard frock coat. In the 1860s, the waist seam on these coats drops below the natural waist, and the overall cut becomes a bit boxier. Notice his sideburns and moustache. His plaid waistcoat is a bold addition to his otherwise austere ensemble. The gold chain attached to his buttonhole is most likely attached to a pocketwatch–a common Victorian accessory.

Secretary of the Interior Usher displays a fine example of a tailcoat and elaborate cravat that was often used for dress occasions.

Secretary of State for the CSA Hunter shows us the frock coat ensemble that was worn by established businessmen during the early 1860’s. His trousers clearly show the high-waist that was favored throughout the mid nineteenth century.

The other two gentlemen pictured here show common ensembles featuring the frock and tail coat. Again, the tail coat is considered a much more formal option than the frock coat. 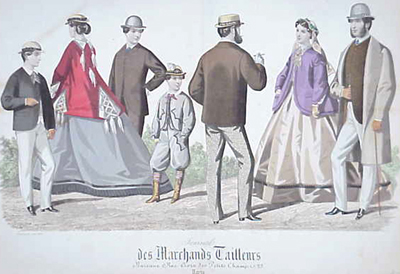 During the 1860s a new coat becomes popular for daytime wear. The sack coat was a loose, fairly unfitted, boxy suit coat that was cut straight from the shoulder. This coat is very much like the modern man’s suit coat. It is generally short–ending somewhere between the upper and middle thigh. There is no waistseam.

All the sack coats pictured in the fashion engraving below  are single breasted, but double breasted varieties were also available. Initially, it is the least formal of all the available coat cuts of this period. During the next period this coat will replace the frock coat as the preferred style of suitcoat.

The bowler hat (rounded crown, small brim as seen on the man at the far right) and the wide awake (a low crown straw hat with a moderate to wide brim as seem on the man in the brown coat in the middle of this image) are popluar hats for casual wear. The top hat remains as the preferred hat for formal attire. It is seen most often paired with the tail coat or the frock coat.

The young man in the center of the above image is wearing knickerbockers (trousers cut loosely through the legs and gathered or pleated into a band just below the knee). This cut of pant sees popularity as an adult garment to be worn for sporting activities. 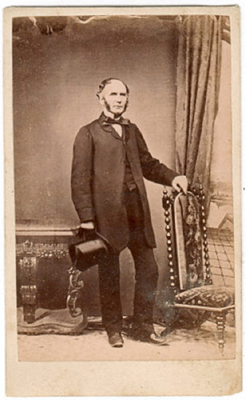 1868 photograph of a gentleman wearing a sacque coat

This gentleman wears a fairly long version of the sack coat. Notice how high upon the chest that the coat buttons. Also notice that his trousers are becoming a bit more straight cut, finally moving away from the “pegged” look.

This gentleman still favors a top hat. While these were generally worn for formal occasions, people have their own idiosyncracies. This is a posed picture, so perhaps he is simply attempting to make his casual attire appear more formal. Without the abilty to ask him, it is hard to know for sure.

TEXTILES: Similar fabrics available. There is a fad for stripes and plaids in women’s dresses.

BASIC GARMENTS: Men: 3-piece suit (frock coat, waistcoat, trousers) worn with a shirt a cravat tied like a bowtie.  Sack coats are introduced. Women: extremely wide skirts on gowns. Layers remain the same as Romantic era at the beginning of the Crinoline period. The biggest difference is the increase in petticoat layers. During the second decade of the period (1860s) layers of petticoats are replaced with a “cage crinoline”. Women are wearing drawers regularly now.