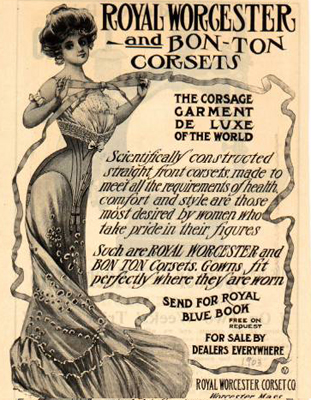 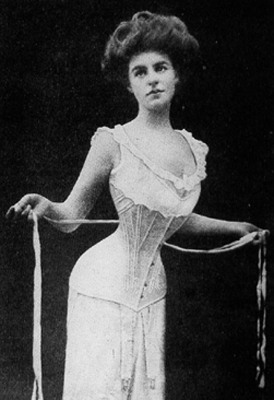 Postcard of a model wearing the new style of Health corset 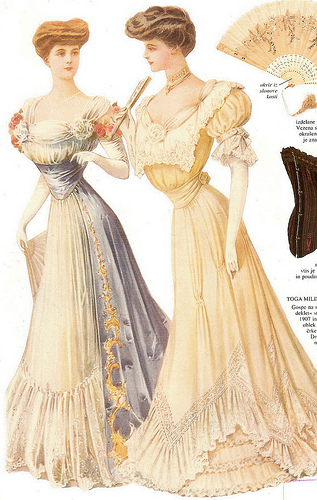 The early Edwardian period is in essence a continuation of the Belle Epoque that is marked by what clothing historians call the “S-Curve” Silhouette. This rather unnatural silhouette is characterized by a tiny waist with a skirt that is smooth over the hips and gently flares into a trumpet shape–puddling on the floor. Bodices and blouses generally have high collars and pouter pigeon (pouched) fronts. This shape creates the top of the “S” curve.

The desired shape is created with the help of the new health corsets (pictured above) which reduced pressure on the vital female organs and dispensed with the constricting curve at the waist that was customary with previous corset styles. The new contraptions contorted the torso into a new shape that gave the appearance of the figure leaning into the wind. Notice that the “Center Neck to Waist” measurement appears to be longer in the front than in the back. The corset pushes the hips backward to create the back curve of the “S” curve.

Edwardian undergarments are marked with a small shift in vocabulary. Lingerie is now the accepted term for a lady’s “unmentionables;” drawers are now called knickers or bloomers. Otherwise most of the layers remain as they were. 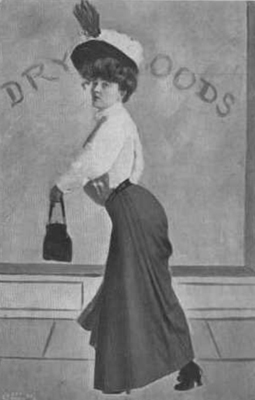 “Oh! Why do they call me the Gibson Girl?” Postcard, copyright 1907. She has the full regalia with the big hat, upswept hair, pouter pigeon blouse, and an hour-glass figure of sorts. The handwritten note on the side of the image reads “This looks like Kit.”

Overall, feminine garments become much softer and more graceful than the previous period and the huge sleeve shapes will fade away.

Women increasingly turn to tailors of men’s clothing with a desire to decorate their garments with the qualities of men’s wear. Female clothing made in this fashion was labeled a tailormade. Generally these ensembles were suits comprised of matching skirts and jackets paired with a shirtwaist (blouse). This was the preferred attire of the Edwardian working girl. Tailormade ensembles allowed her to blend into a “man’s” world while remaining very much a lady.

Notice the heel of her shoe. This is a Louis heel which will remain popular throughout the period. 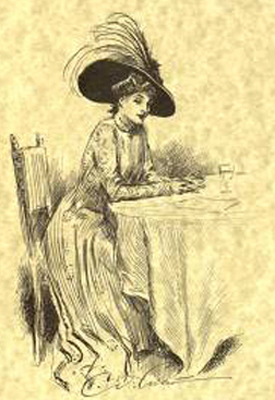 The spirit of Edwardian woman was captured in the artwork of Charles Dana Gibson. Published in many popular literary sources, his pen and ink caricatures of his contemporary society captured much detail about life and fashion in Edwardian society. This is so much the case, that we often refer to the period as “the Gibson Girl” era. Also, the typical hairstyle–a pompudour upsweep with a chignon set toward the back of the crown–is often called a “Gibson” knot. 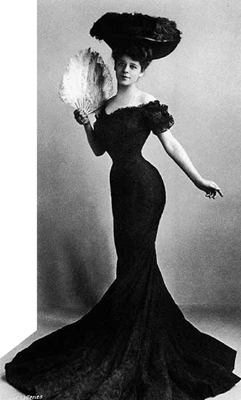 Hats are large in scale and lavishly decorated with artificial flowers, lace, buckles, feathers, and/or bird wings. Picture hats (aka cartwheels) were the largest of them all. Generally considered a lady’s best hat, brims could be even wider than the one pictured here.

This evening gown (and the way that the train is positioned) clearly shows the effects of the health corset, notice how the chest is thrust forward and the hips thrust backward. The narrow width of the skirt is an illusion, as she is posed with the train wrapping around to the front. The skirt is shaped closely through through the hips, however.  The trumpet-like flare of the lower skirt and train begins expanding between the mid-thigh and knee.

Evening gowns were generally of the same silhouette as daywear with lower necklines and shorter sleeves. Sleeveless varieties were also available with only shoulder straps to hold the dress up. The length of these gowns was generally to the floor with a train. 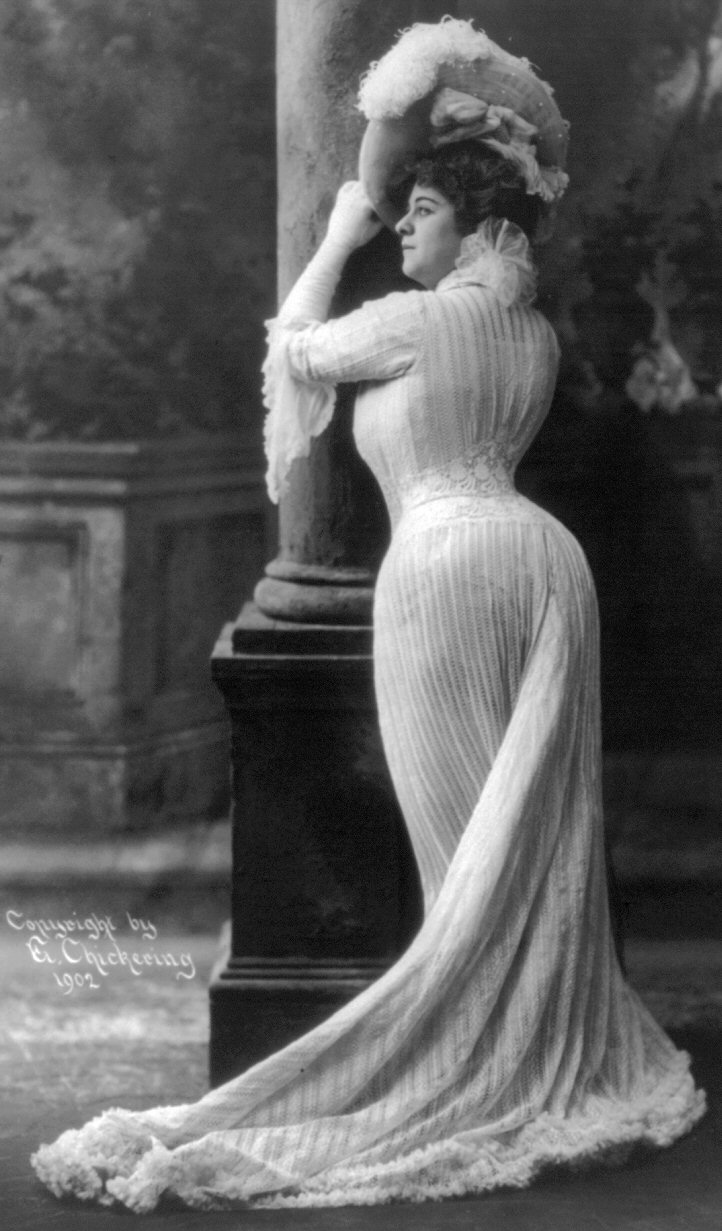 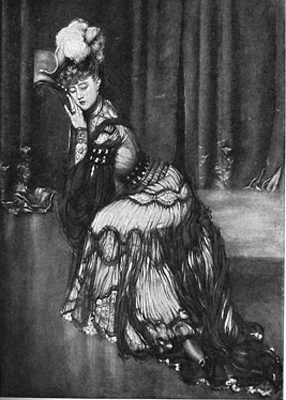 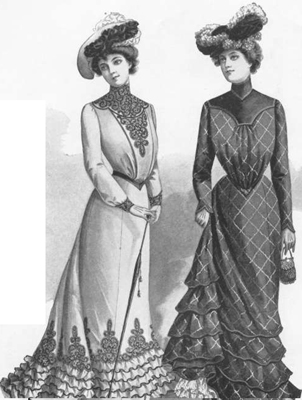 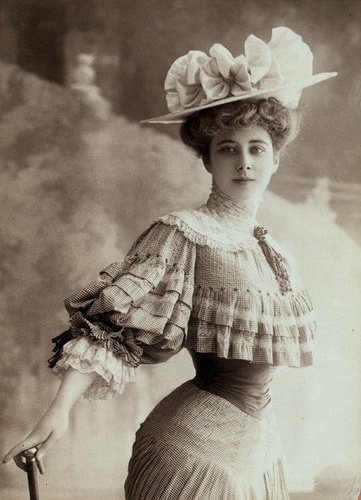 Chemise & knickers 1911, The History of Underclothes by C Willet and Phillis Cunnington

The S-Curve dissolves into a more vertical, columnar line. Referred to as Empire-Revival, the key characteristics of this silhouette have much in common with the lines of the early 19th Century. These include:

–a reduction in undergarment layers

–simplicity in silhouette: the natural outline of the body itself was no longer disguised

While the styles may harken back to earlier days, they are a bit more severe in this new interpretation and are also influenced by trends of Orientalism. The fashions of Bakst, Poiret, and others were heavily marked by influences in cut, draping, and decoration practiced in the Far East. 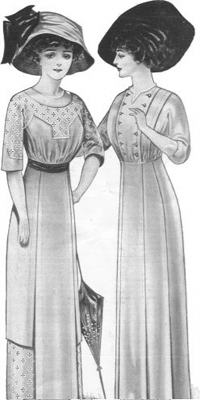 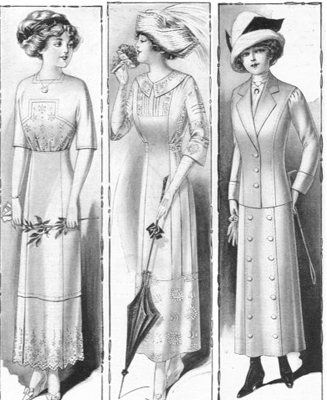 Hats continue to be an important accessory in a lady’s wardrobe. They remain on the larger side, but some styles grow in height rather than width. The hat pictured at the left (above) is an example of this. Referred to as a toque, this hat is characterized as being a tall brimless hat that somewhat resembles a lampshade.

Hats are still generally decorated, although they are done so to less excess. Hair styles, too, are less extravagant–losing much of their bouffant quality.

The evening gown pictured below (left) seems to have a hobble skirt (a style originated by Paul Poiret). Her torso enjoys liberation from the corset of the early Edwardian period, however, her skirt is cut so narrow around the ankles that it is impossible for her to take a full stride. The fashion plate at the right (below) depicts another style characteristic of this period–a tunic worn with an underskirt. 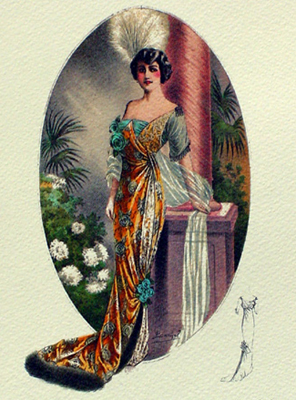 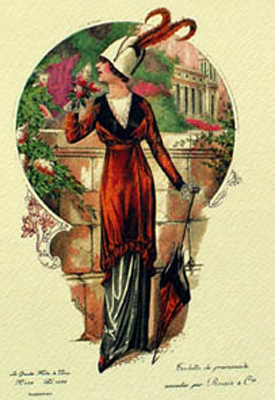 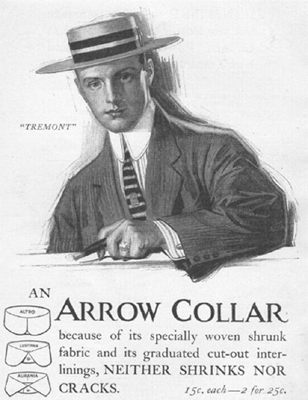 Uniformity of dress among all classes of men continues to characterize male fashions. It becomes increasingly difficult for the Edwardian gentleman to distinguish himself from the lower classes. All he could do was to be, if possible, even more precise as to the exact shape of such items as his collar and tie, and the proper moments when a little relaxation was permissible.

Edwardian men emulated the image of the “Arrow Shirt Man” drawn by J. C. Leyendecker. If the “Gibson Girl” personifies the fashions of the early Edwardian era, the “Arrow Shirt” man fills this same role for the men.

In general, men’s clothing continues down the path of casual-ness and comfort. This is mostly due to the fact that men’s fashion was profoundly affected by the growing taste for sports. Top hats and frock coats are formalities of the past. The sack coat is the preferred coat for most arenas of dress. Also, shirts become softer as the use of heavy starching fades from common practice. This is encouraged by the continued use of detachable shirt collars and cuffs. 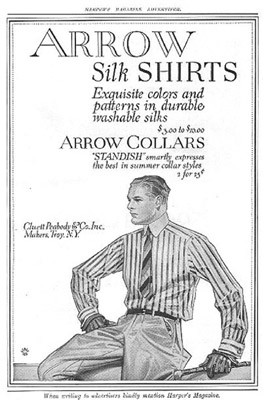 The Arrow Shirt company made a name for itself by offering shirts for men both in colors and subtle patterns. This gave men options for individualizing their appearance. The white shirt with white cuffs and collar remains the most formal of the shirts. However, striped, polka dot, and pastel colored shirts with a white (usually detachable) collar also become acceptable in the professional world.

At the turn of the century, the colored shirt was the distinct badge of the working man. White shirts were the common uniform of the upper class and business world. Thus the terms “blue collar” and “white collar” begin to refer to the type of profession in which one is employed. As we approach WWI and the 1920s, colored shirts for daywear are accepted by all ranks of society.

The same varieties of ties remain options for men–including the four-in-hand tie and the bow tie. A silk asot is sometimes worn for formal occasions such as a wedding or church.

The new available tie is the oxford tie-a version of the broad end four-in-hand tie that was only 1 1/2″ wide. 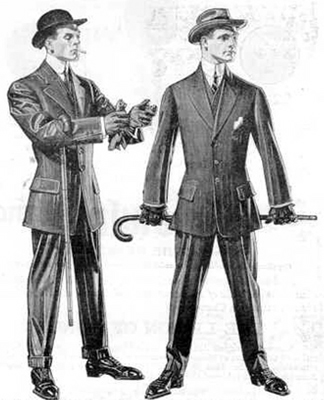 Sack Jacket, vest, trousers, shirt, and tie make up the appropriate attire for professional and business employees during the work week. It is also worn by both blue and white collar workers for social occasions. The ditto suit remains the most accepted version of these garments. However, sporting attire brings about a fashion for suit coats that do not match the trousers and vest in fabric. These coats are referred to as sport coats.

Laboring men wore sturdier clothing to work. While made of heavier materials intended to take the abuse of physical labor, these garments were still cut along the same lines of professional wear.

Morning/Cutaway Coats are still sometimes worn for daytime formal occasions. These may be cut in material matching the trousers as pictured below or may be worn with a contrasting vest and striped trousers. After the war, the use of this coats decreases and is really only seen on the upper classes or political leaders for formal occasions such as weddings, diplomatic receptions and inaugurations.

There is still limited use of the tail coat for formal occasions as well. However, the tuxedo coat–a coat in black wool with satin lapels cut on the same lines as the sack coat–takes its place as the most common coat for formal events. 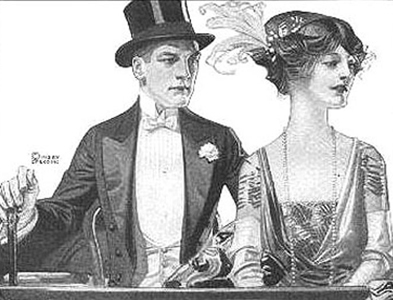 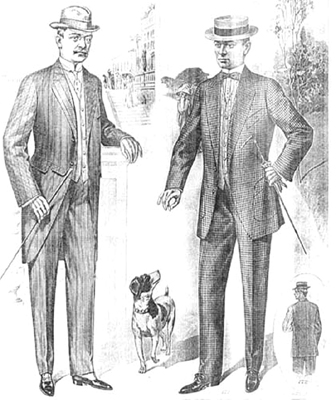