Christian Dior opened his salon in Paris in 1946. His first collection–debuting in 1947–was called the Corelle Line. It was a tremendous success. The fashion press dubbed it THE new look of the season. Today the collection is remembered as Dior’s “New Look.” The appeal of the collection was its “feminine” characteristics which were received as a refreshing change from the masculine, utilitarian, mitilitaristic styles of the war years.

Dior designed everything that his dresses needed to complete the ensemble, including hats, jewelry, petticoats, bras, gloves, handbags and shoes.

Chanel’s response to Dior’s success was the remark, “That’s not new. Its old!” referring, of course to the fact that the New Look was eerily reminiscent of the Crinoline Era.

An iconic look from the Christian Dior “Corelle” Line. Popular culture nicknamed this the New Look

The look is characterized by the following:

–Fitted bodice with rounded shoulders created through the use of shaped shoulder pads, generally with 3/4 length sleeves.

–Hips are emphasized–especially in the jackets. Peplums/basques could be slightly padded to stand away from the body.

–Skirts are either extremely full OR pencil thin, and hemlines are longer (about mid-calf).

–Platform shoes are replaced by high narrow heels. Stockings are usually skin toned and are still seamed up the back.

–Gloves become a very important accessory, as do hats. 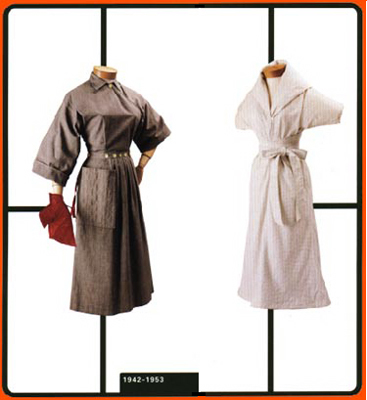 Iconic Claire McCardell looks. The Popover Dress is pictured on the left.

Claire McCardell was responsible for a uniquely American look. Claiming to design clothes that she would chose to wear herself, her garments were known for their comfort. She loved denim and other “American ” fabrics. Equally influencial as Dior in the US, her innovations included the diaper bathingsuit, the “popover” dress (shown here) the“monastic” dress, and ballet slippers for street wear. (She actually struck up a contract with Capezio.) Her clothes are characterized by the following:

–clean lines and functional clothing (buttons actually button, pockets were large enough for the hands and to hold things)

–Appropriate to the occasion; emphasizing the need for casual styles.

–Clothes fit and compliment the body well, flowing naturally with the body while remaining attractive to look at.

Dior and McCardell were the only fashion designers to make the cover of TIME Magazine before the 1970s. This was evidence of how profoundly their influence on fashion was felt even during their lifetimes.

Television was also hugely influencial on popular fashion. By the 1950s, 5 million American families had television sets in their homes. Through this new medium of entertainment, fashion information spread like wildfire. Especially influenced were the teenagers who copied their cherished icons. Pat Boone’s white bucks (oxford shoes made of white buckskin), Elvis Presley’s slicked back pompadour, and Davy Crockett’scoonskin cap were all popular fads among the young.

For the most part TV showed a sanitized view of family life in America, exemplifying idyllic family life. The most prevalent female characters were exaggeratedly middle-class housewives who took sincere pleasure in serving their families. The example set was not always easy for the typical woman to acheive or maintain. Yet, she felt pressure by society to do so. 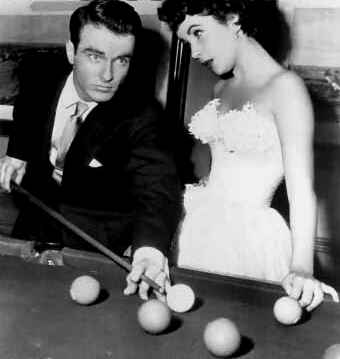 Elizabeth Taylor’s dress from the film A PLACE IN THE SUN was incredibly influential on American teenage formal wear.

Hollywood, too, played a significant role in the spread of fashion. Understanding the power of the silver screen, Hollywood’s costume designers signed liscensing agreements allowing the replication and mass manufacture of their designs. An example of this is the dress that Edith Head designed for Elizabeth Taylor to wear in the film A PLACE IN THE SUN (shown in the image at left). The dress was so popular as a Prom style, that it was common for a girl to show up to her big night to find ten other girls wearing the same dress.

The lines of the New Look were wildly popular. Skirts were either super wide–cut with pleating, gathers or in a circle–or were pencil thin. Women cinched their waists with girdles, cinchers and/or Merry Widows (long line bras with a low back typically worn with strapless dresses). 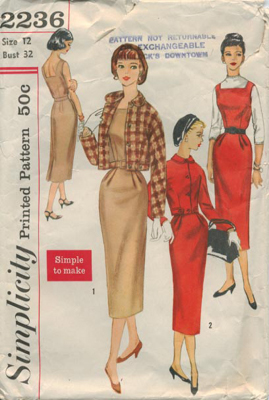 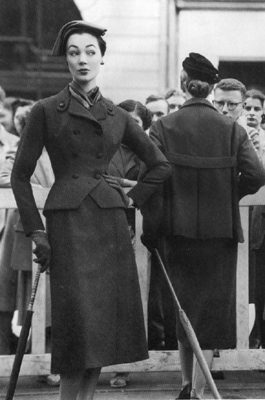 While there were some suits available with a circle-cut skirt, the typical suit had a skirt of the narrow, straight variety. Jackets were generally tailored to fit snuggly (particularly through the waist) and generally had a peplum.

Coordination was the key to a well dressed lady. Hats, gloves, ear bobs (small button sized earrings), and beaded choker necklaces were all carefully chosen to either match or complement each other.

Sportswear comprises a growing part of a lady’s wardrobe. In general, the silhouette of this casual attire also followed the lines of the New Look. Blouses followed the lines of dress bodices and suit jackets–shaped to follow body contours with darts and/or seams, resulting in a smooth fit through the bust and ribcage. Sweaters are a very popular alternative to the tailored blouse. They also fit snuggly. Twin sets (matching cardigans and pullovers) were favored and were often paired with a skirt. Shrugs (boloero-like cardigans) were also popular accessories. 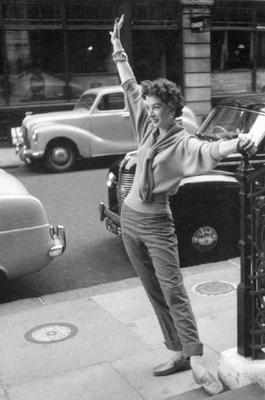 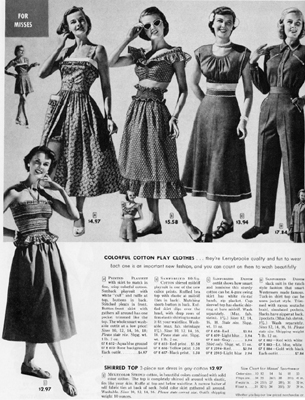 Pants continue to carve out their place in a woman’s wardrobe as well. While they are not accepted for all occasions, many women–especially teens–adopted them for casual wear. Pants were generally narrowly cut–fitting the leg closely. Names for feminine pant styles were designated by their length. Pants/slacks were ankle-length; houseboy pants ended at the lower calf; pedal pushers/capris–ended just below the knee at the upper calf. Audrey Hepburn contributed to the popularity of the shortest style.

Beginning in the late 1940s magazines advertised denim slacks for women. Women also “borrowed” jeans from their brothers’, boyfirends’, and husbands’ closets. This was seen as an act of rebellion on the part of these ladies and was a particularly hot trend among teenage girls. 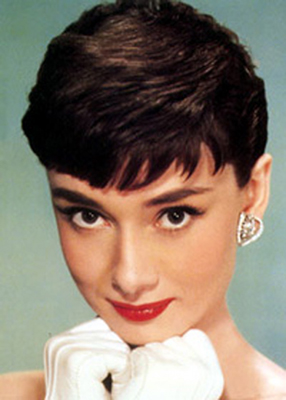 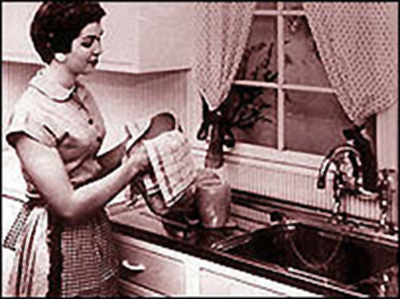