This 6 7/8″ terra-cotta statuette dates from 2000-1850BC, or what is considered the Middle Minoan era. It was found on the eastern coast of Crete. He wears a loincloth held in place with a leather belt (AKA girdle). Attached to his belt is a dagger and sheath. Archeologists believe that this statuette depicts a soldier. 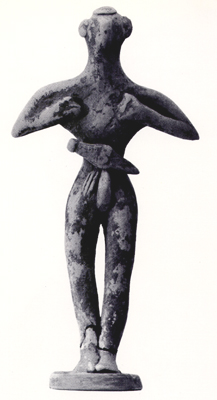 These terra cotta figurines were strange idols, a full meter tall with long necks and removable feet, though with the familiar upraised arms. http://www.greeceathensaegeaninfo.com/h-greek-islands/crete/lasithi-pre4.htm

This image is a 87″ tall fresco from a large vestibule in the south wing of the palace of Knossos. It depicts a the “Prince of Lilies”. His crown is truly a diadem decorated with lily blossoms with three long feathers emerging from a lily. He wears a phallustache, an apron and a tightly fitted belt. 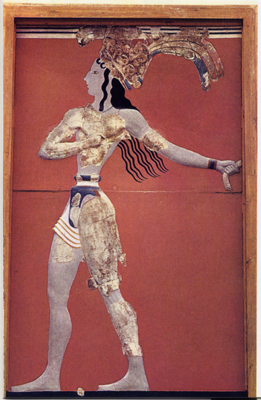 A fresco depicting the ‘Prince of the Lilies’, an emblematic image of Minoan. c. 1600-1500 BC. His diadem is decorated with lilies and adorned with peacock feathers. http://www.heraklion-crete.org/archaeological-museum/

This belt could be made out of fabric or leather and decorated with precious metals. It is believed that the purpose of this belt was to give the men a slender waist. It is possibly an example of body modification. He probably is wearing a loincloth as well.

Despite his royal status, notice that this prince is barechested. Clothing is decorative only. 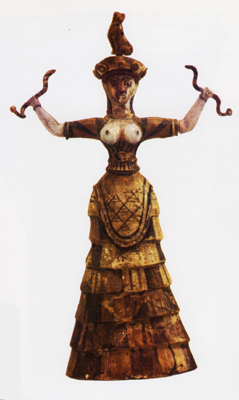 A statue depicting the Minoan Snake Goddess from the Heraklion Museum in Crete. http://www.heraklion-crete.org/archaeological-museum/

This faience (earthenware decorated with opaque colored glazes) statue was found in a temple in Knossos and dates back to the 17th century BC. It depicts the Snake Goddess–the central deity of the early Aegean peoples. Evidence tells us that court attire for noble women was comprised ofthe garments depicted here.

These garments demonstrate a high skill level of sewing that most likely developed out of a desire to conserve the use of leather. The bodice laced up center front underneath the breasts. It is possible that a sheer piece of fabric would be tucked in the front of this bodice to cover the exposed bosom, but there is little concrete evidence to support this theory.

The bodice features evidence of many seams–including set in sleeves. She also wears a bell shaped skirt with multiple tiers of gathered flounces. Over her skirt she is wearing an apron, which was typically high on the sides and long in the front and back and could be heavily decorated. She could be wearing a tight fitted belt or girdle similar to those that we have seen the men wearing. It is believed that a tiny waist was just as favored in women, as it was in men.