Clothing terminology for this time period is somewhat ambiguous, due to a lack of written record. As a result we resort to common terms shared among the Historic Costume community, rather than use the words people of this time would have used.

Frankish Nobleman, after the bible of St. Martin of Tours in the Bibliotheque Nationale. (Quicherat)

On that note, this Frankish man wears typical dress for the Merovingian/Carolingian dynasties. He is wearing a kneelength tunic (he may be wearing more than one, bit it is difficult to determine from this drawing), long braies (these may stop just below the knee or extend to the ankle), and a paludamentum style cape. He is without hose, but instead employs leg bandages as an alternative. 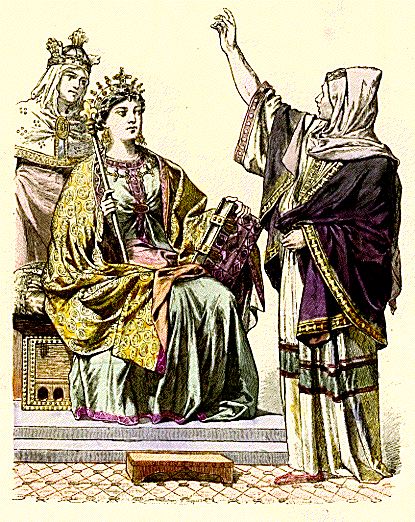 Female dress is very similar to that of the Byzantine empire. Women wear multiple tunics. Possible layers of clothing for this queen would be: a linen shift (sleeveless tunic that functions like a modern slip), under tunic, outer tunic (which could be open down center front and closed with jeweled pins), cross gartered linen stockings, thin leather slippers and a veil.

Women still use a palla-like shawl for warmth and to cover the head.

There is some evidence of a short tunic similar to what we might call a blouse in modern cultures. The sleeves are still cut “in one” with the body, however. 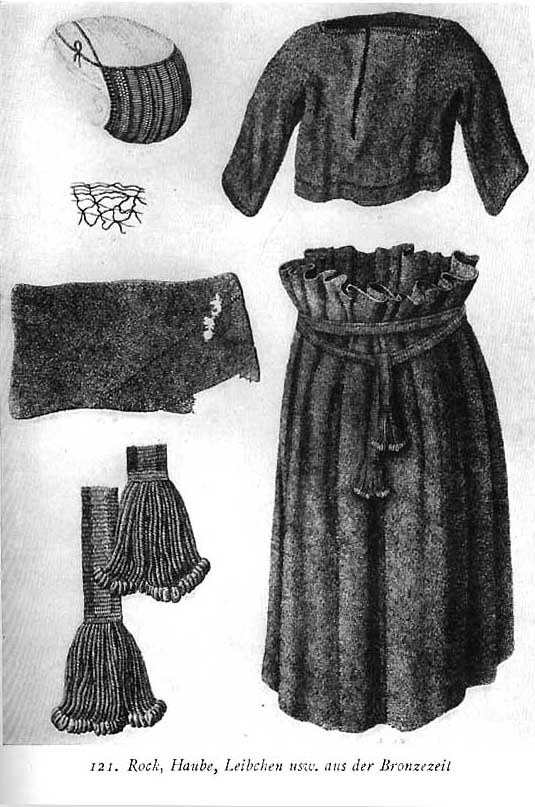 These short tunics were worn with a primative skirt. The skirt was constructed from a rectangle sewn into a tube which was then gathered down to the waist with a girdle. Other extant skirts of this nature show evidence of the upper edge of the skirt folding over to create a casing at the top edge, through which the girdle would pass, creating a drawstring. 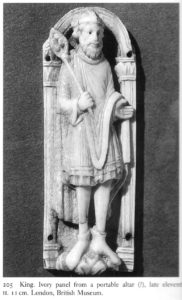 Historic record returns to us in the Romanesque period (early Middle Ages). Due to substantial written record, historians return to employing contemporary words to label clothing.

This Romanesque man wears a chemise (a linen undertunic meant to serve as a protective layer for the skin from his garments and the garments from the skin. Many garments are made from wool of various textures, making protection a necessity for comfort) and at least two other tunics–a bliaut under a roc. For point of clarification, chemises, bleats, and rocs are all types of tunics. Their name signifies the order of the layers.

He would also be wearing braies (linen undershorts) and possibly hose as well. It appears that he may have on a chausable (a ponco-like garment usually affiliated with the church in modern times). It appears that he has on some sort of ankle boot as well. 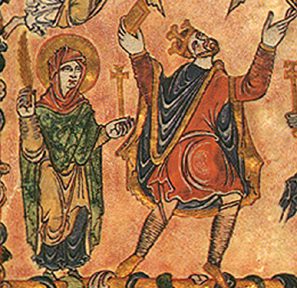 Detail from a page of the charter of Edgar to the New Minster, Winchester. The image depicts King Edgar “The Peaceful”.

This 10th Century manuscript illumination shows a King Edgar and a woman in typical 10th Century dress. Both have rucked sleeves–extra long sleeves that are bunched up on the arm to reveal the hands. Her bliaut is revealed at the hemline (in dark blue) below her roc.

Due to his assumed status, I would wager that he is wearing cross-gartered hose or long braies rather than leg bandages.

Hose (while functioning in the same manner as modern tights) did not have the benefits of elasticity. It was not capable of hugging the leg and therefore gravity would pull them down. Cross-gartering was a technique that involved wrapping strips of fabric or leather around the leg in order to hold the hose up. Another interpretation of this image would be that his hose are extra long and rucked in the same manner of his sleeves. 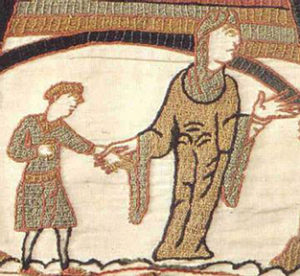 Detail from the Bayeux Tapestry, Late 11th cent. This image shows a woman fleeing a house that has been set afire by William’s troops upon landing in England.

This image from the Bayeux Tapestry shows us an 11th century woman and her son. Tunics of the 11th Century were more fitted through the torso than those of the 10th, and rocs generally featured wider sleeve widths. We see both of those characteristics here–her sleeves are characteristic of early pendant cuffs (long cuffs that hang downward from the wrist)–the length is rather reserved when compared with what is yet to come. Sleeve lengths and sizes will continue to grow into the next century. Rucked sleeves disappear at some point during the 11th Century. 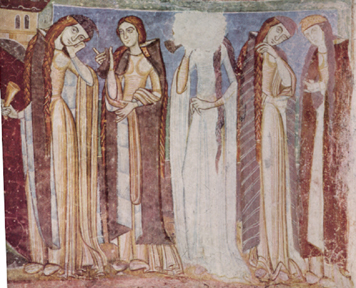 A frecso dipicting the story of “the foolish virgins” from Castel d’Appiano in Trentino Alto Adige, Italy

These women are wearing roc and bliaut styles form the Early 12th Century. note the extremely long pendant sleeves (large funnel shaped sleeves that are cut “in one” with the dress). These dresses fit fairly smoothly through the torso and generally close on one or both side(s) with eyelets and lacings.

The other time period indicator is the length of the ladies’ hair. Long braids were very common amongst women of all ages during this time period. Often ribbons were woven into the braids. 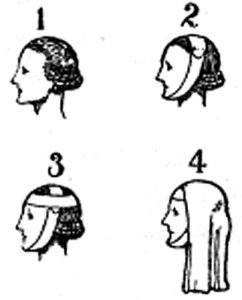 This style of headdress becomes popular towards the end of the 12th century, especially for married women. It will be the dominant style of adornment during the 13th and 14th Centuries. It contains the following components:

1. Hair is braided and coiled at the back of the head.

2. Barbette–a roughly 2″ linen band that runs under the chin and over the temples.

3. Filet/Fillet–a roughly 2″ linen band that sits horizontally on the head.

4. Veil–this could be placed over OR under the fillet. 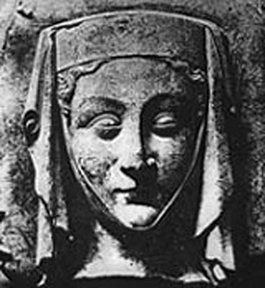 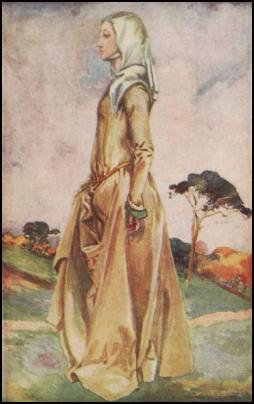 Rocs and bliauts in the second half of the 12th Century are often fitted through the torso. They differ from those of the first half of the century due to the addition of a waist seam. This seam was placed below the anatomical waist at about the hips–creating a “dropped” waist. This added seam allowed much more fabric to be placed in the skirt. This fullness could have been added through some light pleating or gathering to the “waist”, but more often than not the added skirt was cut in a similar manner as a modern circle skirt.

Sleeves at this time seem to be either very large and exaggerated OR very narrow and fitted as shown here. It becomes increasingly more common for married women to cover their hair completely.

The evolution of the male tunic follows the same path as that for women. Extremes are exaggerated far less, however–sleeves never get as long, torsos never get as fitted, and skirts never get quite as wide.

The male roc and bliaut gradually shorten over time, leaving longer styles to the older, more reserved gentleman. Length seems to hover around the knees for much of the Romanesque period.

SILHOUETTE SHAPE: Transition from Roman Rectangle to the elongated wide based triangle of the next period (Gothic)