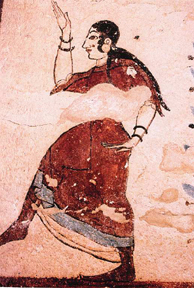 This Etruscan woman is wearing the long tunic/tunica called a kolobus-colobium. Using the tunic construction techniques that we have discussed in reference to other civilizations, this Etruscan variation features shaping through the torso allowing for a more “fitted” silhouette and generally falls to the ankle.

She is most likely also wearing a perizoma underneath and some sort of fitted leather shoe. Longer hair worn in multiple braids was very common in the early generations of this civilization. The later generations tended to arrange the hair on top of the head in a fashion similar to Greek women. 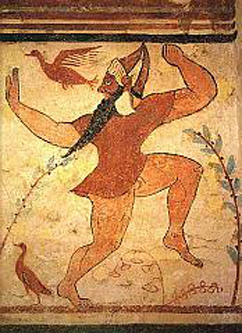 This Etruscan man wears a chitoniskos (a short tunic/tunica). He appears to be bare legged and bare footed, although he is most likely wearing a perizoma as well. Notice his long pointed beard. This a truly Etruscan fashion. His pointed crown hat is a tutulus. The tutulus also has a variation with a rounded crown.

The man below is wearing a slightly longer chitoniskos and a chlamys. His fitted leather shoes are a common element of Etruscan fashion. The latin named given to them is calcei repandi. The female version of this shoe features a slightly less exaggerated point. Usually painted or dyed red, these shoes are a sign of status. 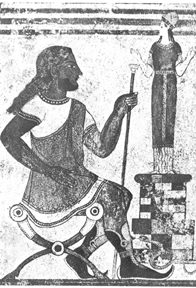 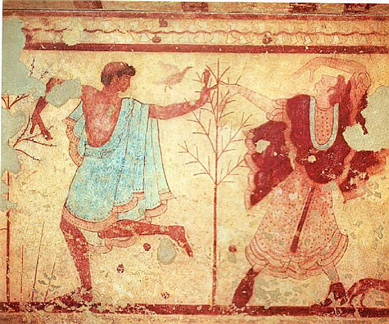 The dancers in this fresco below are decked out in very colorful tebennas. A tebenna is a large crescent or semi-circular wrap that could be worn in similar fashion as the Greek himation. It could also be worn in a uniquely Etruscan manner as the figure on the right.

The tebenna is believed to be the true forerunner of the Roman toga.