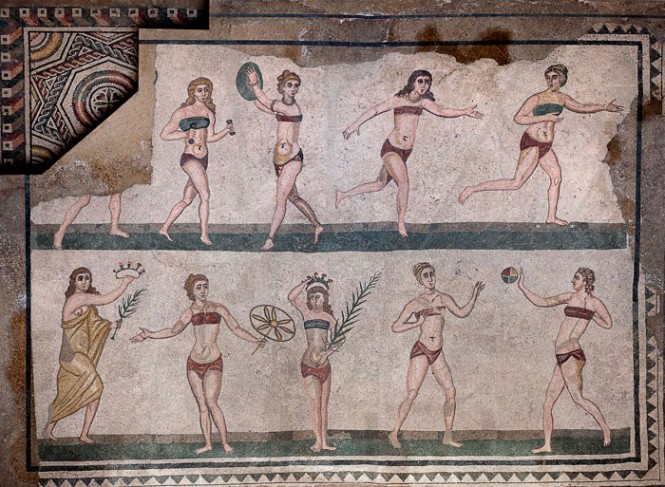 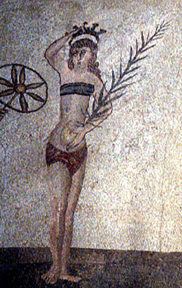 Mosaic detail from the mosaic from Villa del Casale – in Piazza Armerina, Sicily

This 4th Century mosaic depicts a victorious female athletes wearing sporting attire. These garments may also have served as early female undergarments. Her loincloth, a subligaria, (the male version is called a subligar) is very similar to the Greek perizoma. The band over her breasts is uniquely Roman. The strophium provided support for the breasts during athletic endeavors. It is unclear whether this was worn only by athletes or if it was incorporated into the everyday dress of all women. 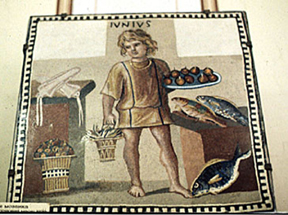 The mosaic to the left depicts Junius, a kitchen slave. He wears a narrow tunica with clavi (vertical stripes running shoulder to hem. In this case, the clavi are symbolic of his connection to his master).

Although he is a slave, his tunic is rather elegant. Appearances are very important in Ancient Rome, therefore, it was common for the patriarch of the home to provide clothing for the slaves under his supervision that reflected his status and wealth especially if the slave would be visible in the household to visitors of the home.. 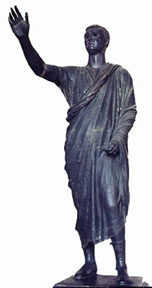 This bronze statue from the 1st century BC depicts an early toga. The toga was regarded as the national costume of Ancient Rome. Initially the toga was quite modest in size–very similar to the Greek himation or Etruscan tebenna. As the Roman empire grows, so does the size of the toga–so much so that it becomes cumbersome and unwieldy. Perhaps there is a metaphor for the empire as a whole in this. 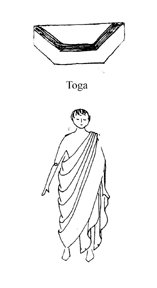 This type of toga is most familiar to us. It is worn over a wide tunica. The Roman tunica is more reminiscent of an early Greek chiton (with the shoulder seams and sides sewn closed, leaving a hole for head and arms) rather than the T-shaped tunic that we have discussed before.

This method of construction allowed for what appears to be a sleeve with excess fabric under the arm on the statue at the left. We are only able to see the tunica and toga in this statue. He would also be wearing a linen undertunic called a subucula. The tunica may or may not be girdled.

Eventually the T-Shaped tunic will replace the tunica.  This version has the distinct cut and sewn sleeves. 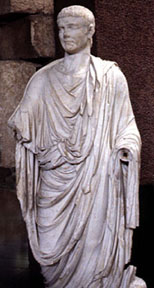 The large, cumbersone toga is draped on top of the visible tunica. Through skilled draping (which generally required the aid of multiple specially trained slaves) a cavity that served as a large pocket (sinus) was often formed. The umbo refers to fabric drawn up from behind the sinus that helped to secure the “pocket ” in place. This man would be wearing a subligar under his tunica. 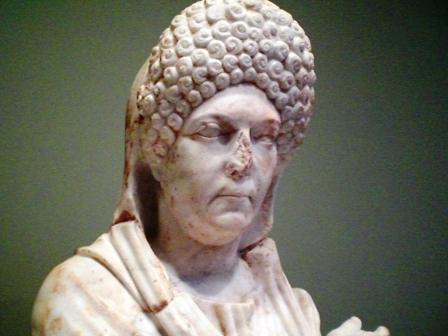 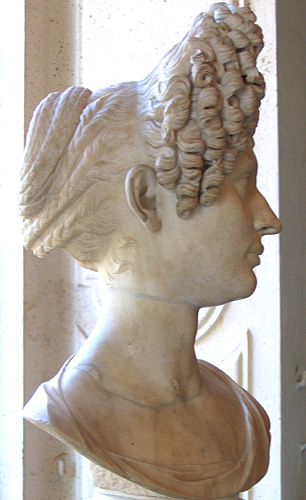 This iconic Roman hairstyle was adapted from the Etruscan tutulus style.  It is a signifier of a married Roman woman in good standing. 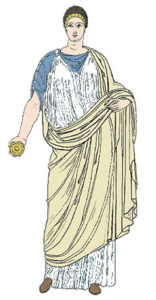 secondary source drawing based off of layers of garments similar to the Livia statue. Blue=Tunic, White=Stola, Yellow=Palla.

Roman female attire consisted of variations of male garments and Greek garments. A properly dressed lady would be wearing an unseen subucula (an undertunic), and then a tunica (shown in blue in the drawing at below). Construction of these garments is the same as corresponding garments in the male wardrobe.

Over these tunics a woman might also wear a stola. A stola was only worn by free, married women and was considered a symbol of status. It was constructed in the same manner as a basic chiton (the basic version without the overfold) or the Ionic chiton (the wide version with the multiple fibulae running down each arm) from the Greek wardrobe. She would also wrap herself in a palla, which was simply a Roman version of the Greek himation. She would most likely be wearing a subligaria, and could possibly also be wearing a strophium. She would also be wearing shoes.

TYPE OF DRESS: draped with some simple sewing due to the introduction of the Tunica.

SILHOUETTE SHAPE: heavier and bulkier version of Greek. Due to an increase of fabric and a decrease in finesse of textile creation, the silhouette (especially for men) is rather rectangular. The natural hourglass is obscured.

MOTIVATIONS FOR DRESS: Status for men, decoration & status for women.

KEY IDENTIFIERS: Architectural hairstyles for women, lots of fabric in the togas (body concealing rather than revealing), tunica replaces chiton (look for sleeves), clavi on tunicas and togas, sandals are much more common than in Greece.