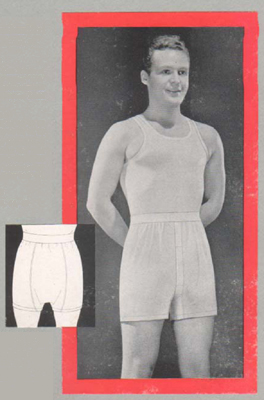 from the 1930’s “Real Silk” Catalog of Men’s Haberdashery

While older and conservative men may still chose to wear knitted union suits (with short or long sleeves and legs), the 1930s brought about a new vogue in male undergarments. Both boxer shorts(inspired by the shorts worn by professional boxers) and jockey shorts (knitted brief shorts along the lines of what we might call “tighty whities” today) were introduced during this decade.

Athletic shirts (knitted cotton shirts adapted from the top of the tank swimsuits popular with men during this time. Also known as A-line shirts) appear at about the same time. They remain popular until after the war. Servicemen were issued knit undershirts with short sleeves (called T-shirts a reference back to the idea of a T-shaped tunic) to wear under their uniforms. These shirts found favor with the soldiers and quickly find their way into civilian use upon their return from the front.

1930s English Drape suits from an advertisement in the Sears Catalogue.

Suits of the 1920s and 1930s are marked a bit by excess. Throughout the 1920s pant legs grow steadily in width. The widest pants were worn by students at Oxford College to conceal their knickers while attending classes. Oxford Bags could be up to 32 inches in width. While most men never wore this fad, trousers became fuller through their influence. Pant legs narrow slightly during the 1930s, but as seen in the images to the right, hem lengths are still on the wider side. A 1930s innovation was the addition of a zipper in the trouser fly. First worn by the youthful Prince of Wales (AKA the Duke of Windsor), popular fashion quickly jumped on the bandwagon.

By the 1930s even the torso of the jackets are cut with extra boxiness for added comfort. When these coats were buttoned the extra fullness fell softly with a slight drape or wrinkle through the chest and shoulders. Referred to as the English Drape Suit, this style is the prominent suit cut of the 1930s. Shoulder padding also becomes sharper and wider during these decades.

A typical man’s suit consisted of a jacket, vest, and two pair of trousers. All of the pieces were tailored out of the same fabric. Sack suits remained the basis of a man’s wardrobe. However as we move toward the war years, they become increasingly confined to work in offices, going to church, and formal/fancy occasions. White suits for summer were available for those who could afford variety in their wardrobe. As a result, the white linen or flannel suit became symbolic of an upper-class life style.

L-85 Regulations during the war altered the English Drape suit. Restrictions on wool–which became quite scarce due to its redirection toward production of soldier uniforms–were tight. the American War Production Board set the maximum lengths for jackets and trousers in each size. Excess width through the torso and trouser hem was eliminated as were pant cuffs, pleat-front trousers, and overlapping waistbands. Double breasted styles become rare, especially in larger sizes. The customary vest and second pair of trousers were also eliminated in an effort to conserve fabric–a trend that remains true of most suits today.

An underground trend for a new style called the Zoot Suit was a possible reaction to the regulations. Initially popular with African American and Hispanic teenage boys generally at the lower end of the socioeconomic ladder, this was an extreme form of the sack suit (or a re-invention of the Frock Coat). The jacket was long with excessively wide shoulders and long wide lapels. Trousers were severely pegged. Generally made of brighter wools or light colored cottons this style swept jazz and swing clubs in major cities. It was eventually worn by all races in the US and Europe, but remained a non-mainstream trend. 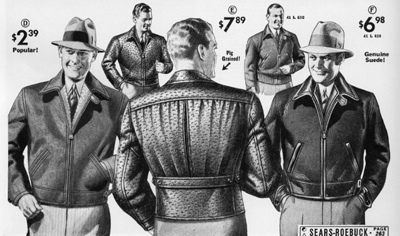 World War II spurred a number of trends in casual jacket styles. The Eisenhower/battle jacket was a short, waist-length bloused jacket with an attached band or belt of the same fabric. Worn by Dwight D. Eisenhower during the war, versions of this jacket turn up in both men’s and women’s wear. 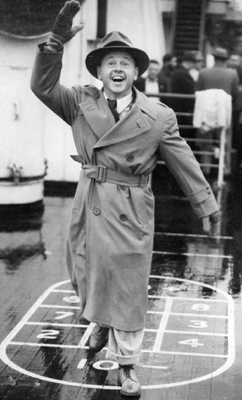 The Trench Coat is another civilian style based upon military issue uniforms during the World Wars. Mickey Rooney is pictured here.

The trench coat (which was actually a WWI invention, pictured above in the right image) is also a popular trend of this period.

Hats remain a staple of a proper man’s wardrobe. Homburg and fedora styles are the most common and sophisticated of the available styles. These are the accepted hats of the business professional. Working class men would generally favor a fedora for formal occasions–such as attendance at church. As a matter of etiquette, men are expected to wear a hat anytime that they are outdoors or outside their home.

Considered more casual, cloth hat styles were also very popular throughout all three decades. The  driving cap/newsboy was just as common as the fedora. Somewhat of a working man’s style, this cloth cap was actually worn by all classes. Upper class men favored them for driving (thus their name) or for sporting purposes.

There were even versions of the fedora and homburg made out of cloth (seen here in the middle of the bottom row in the image at the left). These were particularly popular during the war when wool becomes rationed. 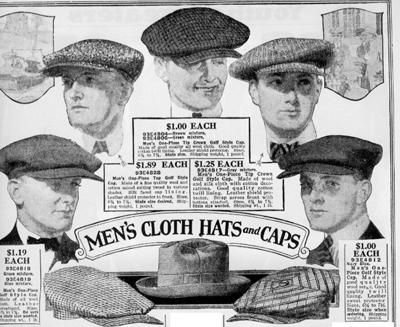